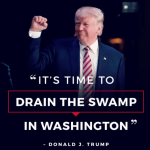 The world was simpler when Donald Trump was merely spouting off slogans or saying offensive things at rallies. But every day brings worse news. The three a.m. tweets, which once showcased his ignorance and lack of discipline, now have real-life consequences, and they’re not for the faint of heart. Trump’s leadership picks are  grotesque, a story of crony capitalism. It is, to paraphrase Shakespeare, “a tale told by idiots, signifying” far more than we can imagine.

The man who said he would drain the swamp is simply restocking it with his favorite specimens.  The man who said he knew more than the generals is now fortifying his administration with them.   He who decried Wall Street money’s influence on politics is larding his team with his billionaire donors. The candidate who scoffed at Hillary Clinton’s ties to the banking industry has named Goldman Sachs executive Steven Mnuchin as treasury secretary,  distressed asset investor Wilbur Ross as commerce secretary and, lest we forget, former Goldman alum Steve Bannon as strategic advisor.  There are so many other millionaires and billionaires playing significant roles that  Forbes is keeping a running list.

I’m not opposed to millionaires and billionaires in government, and some could provide fresh and useful perspectives. But the policies his nominees support are chilling.  Amway heiress Betsy DeVos, his education secretary choice, is not a supporter of public education. His labor secretary, fast food CEO Andy Puzder, opposes the minimum wage.  Oklahoma Attorney General Tom Pruitt, proposed environmental secretary, is a climate change doubter and wants to undo Obama regulations of the fossil fuel industry.

Trump’s selection for Health and Human Services, Rep. Tom Price, is dead set against the Affordable Care Act and isn’t too protective of Medicare either. Don’t get me started with the possibility of Exxon-Mobil CEO Rex Tillerson becoming Secretary of State.

Ben Carson, tapped to head Housing and Urban Development, believes public housing fosters dependency.  (If you really want to lose sleep, catch up on Designated Survivor, the TV drama about what happens when the HUD Secretary is designated not to go to the State of the Union speech “just in case” something happens to the President and his potential successors.) I certainly hope we don’t have a Russian mole in the Trump administration.  There are  plenty of friends of Putin there.

The most disturbing news of all is the growing consensus in the intelligence community that Russia, in some way, hacked into our election. We will never know whether it affected the outcome. But foreign hacking is a threat to our democracy and, if sensitive data are in Russian hands, that material could be used to interfere in strategic decisions going forward.

Trump’s dismissal of the CIA report as “ridiculous” is not reassuring. One of the most promising developments in the past 48 hours is growing bipartisan support in Congress to investigate the matter, but it’s disturbing that Senate Majority Leader Mitch McConnell wants it to be done by the Senate Intelligence Committee as part of its regular course of business. McConnell, whose wife is Trump’s Transportation Secretary nominee, could be swayed by narrow partisan pressures.  John McCain rightfully calls for a bipartisan special select commission engaging both House and Senate members of Intelligence, Foreign Affairs and Armed Services committees. In the interest of timeliness, some individual committees can start now, but to be effective the effort should be broad-based and coordinated.

Former CIA director Michael Morell, who briefed George Bush in the wake of 9/11, now calls the hacking “the political equivalent of 9/11.”  It’s a chilling comment we should take seriously.

I  welcome your comments in the section below. To be alerted when a new blog is posted, click on “Follow’ in the lower right portion of your screen.

3 thoughts on “Donald Trump: the gift that keeps on giving”