Recently, a Philadelphia church official, Msgr. William Lynn, was sentenced to three to six years in prison on one felony child endangerment charge for covering up sexual abuse by the now laicized priest, Edward Avery,  whom he supervised. Lynn was acquitted of conspiracy and a second endangerment count involving a second priest, on whom the jury deadlocked.  The concern underlying the charges and conviction was Lynn’s apparent shielding of predatory priests, protecting them from public scrutiny by reassigning them to different parishes, and lying to spare the Church’s reputation from scandal.  He had a responsibility in those three areas under both secular and canon law.  Msgr. Lynn mounted a defense saying he was obeying orders from his own supervisor, Cardinal Anthony Bevilacqua, Archbishop of Philadelphia and a canonist, who died earlier this year.  Meanwhile, Cardinal Bevilacqua’s successor, Cardinal Justin Regali, failed to provide material relevant to the scandal to his own review board.

Elsewhere in the keystone state, Penn State University is suffering the consequences of its failure to protect young people, and the institution is paying a price.  Former coach Jerry Sandusky was convicted of 48 counts of sexual abuse of students, what former FBI Director Louie Freeh said in his report were “multiple counts of involuntary deviate sexual intercourse.” Sandusky has been locked up, effectively for the rest of his life.  But the most senior leaders of the university, including but not limited to, head coach and icon Joe 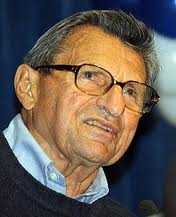 Paterno, were found to be complicit in covering up what Sandusky did, with “total and consistent disregard for the safety and welfare of Sandusky’s child victims.”  All this to prevent bad publicity for the university and its football program.

Meanwhile, at Lackland Air Force Base in Texas, a few days ago,  staff sergeant Luis Walker was given 20 years for the rape of 10 women whom he supervised.   S. Pamerleau, a retired major general and former head of Air Force training, said the conviction should send a strong signal that this kind of predatory behavior is unacceptable and will not be tolerated.

What I hope is starting to happen is that law enforcement and the public are starting to understand the criminal culpability of administrators who had the authority to exert moral suasion and failed to take decisive action.  Achieving that level of accountability will be a challenge, whether we’re talking about university sports programs, the clergy or the military, all male-dominated institutions dedicated to the cult not only of the institutions but of some sense of “brotherhood.”  (Air Force Major S. Pamerleau, by the way, is a woman, which may explain why she was so fast to condemn the rapist drill instructor.)

Societally, we need to get to the point where such powerful males begin to place a higher value on saving the children’s or women’s lives from ruin than on protecting the social bond among themselves and institutional loyalty to the clubs they have controlled for generations.

Responsibility needs to be assigned proportionately with built-in measures of accountability.  It’s not enough to dump a CEO, archbishop, top officer, or university president.  There may be some satisfaction that the guy at the top is implicated and punished, but there’s evidence that others throughout these systems also failed to be accountable.  Systemic change is necessary if justice is truly to be served.