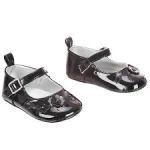 Wearing skirts has always been a challenge for adolescent schoolgirls concerned about their privacy, an issue made patently clear by John Powers’ 1975 coming-of-age book Do Black Patent Leather Shoes Really Reflect Up? I believe local writer Caryl Rivers also talked about it in her book Virgins. But you didn’t have to be at a Catholic school to worry about such things.  In the 21st century, technology trumped the high reflection of shiny black patent “Mary Janes.”  The use of cameras to record what’s up under women’s skirts has actually become known as upskirting. And those doing it aren’t just adolescent boys but adult pervs.

take pictures up the skirts of women sitting across from him on the T.  Yesterday the state’s Supreme Judicial Court said that the charges didn’t meet the standard of criminal voyeurism because the victim has to be nude or partially nude.  (I don’t know how short their skirts were.  Some minis today could even be construed as partial nudity, but that’s a different story.)

The Court also said that the women shouldn’t have any expectation of privacy because they were in a public setting (which itself uses cameras in some locations).  Justice Margot Botsford said that a law targeting such voyeurist and assaultive (my words) conduct is reasonable, but the law, as written today, doesn’t cover that.

Most people are genuinely outraged to learn that upskirting is legal under Massachusetts law, and Beacon Hill politicians have said they will try to change the law.  There’s plenty of precedent for doing so.  Back when I was doing editorials at Channel Five, some jerk started sending me harassing faxes.  Over time, they got more and more threatening, and I was getting more and more fearful that he would act on his threats.  So I called local law enforcement to ask if anything could be done. Long story short, the police figured out who it was and charged him with under the law criminalizing harassing phone calls. However, even though the fax machine ran on phone lines, the court (the issue went all the way to the SJC) determined that the law didn’t anticipate fax technology and thus didn’t cover the guy’s threatening behavior.  So the legislature passed a bill to extend phone harassment statutes to new technologies.  And I was glad of it.

The point is: virtually no one condones upskirting. Rape crisis counselors have been quick to assert that sexual violence doesn’t have to involve touching. But yesterday’s SJC ruling was based in the legal fact that there is a gap in the law. It’s time to fill that gap and do it quickly. In the meantime, creeps – turn your cell phones off.

I welcome your comments.

One thought on “Patent leather shoes and other intrusive technologies”