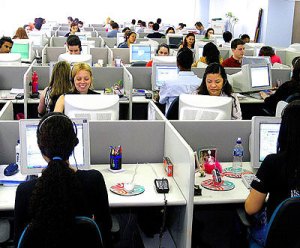 Both Martha Coakley and Scott Brown have deluged potential voters with robocalls. Amid the calls on behalf of Brown, a household of independent voters received the following live call this afternoon.

Caller: I’m calling to ask you to please vote for Scott Brown today. It’s very important that you get out and vote for him today.
Response: Thank you. Could you tell me why it’s important.
Caller: Because he’s opposed to the HELP bill. The HELP bill is bad. It’s bad for America.
Response: The HELP bill? Are you saying the HELP bill. H-E –L-P?
Caller: Yes
Response: Where are you calling from? Who are you working for?
Caller: I’m calling from Alabama, from a call center for the Republican Party.
Response: Why is this HELP bill bad? Isn’t helping usually a good thing? What kind of help does this bad bill provide?
Caller: I don’t know. I’m just calling from the Alabama Republican Party and they told me to tell people to vote for Scott Brown and the HELP bill is a bad thing.
Response: I’m confused. Do you have a supervisor who can explain things to me so I can make the right decision today?