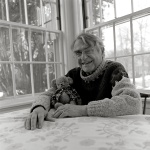 In 1990, my husband and I visited Prague, including the old Jewish section – the synagogue, the cemetery, and the tiny adjacent museum displaying drawings done by Prague children during their imprisonment in Terezin, the Nazi concentration camp outside the Czech capital. The children signed the drawings, and scribbled their ages – nine or 10 years older than I at the time, but close enough to me to make a huge emotional impact.  “There, but for the grace of God, go I.”

Michael Gruenbaum was one of those children. He was born in Prague in 1930. The Nazis killed his father who, it was later rumored, had been torn to death by dogs specifically trained for the purpose.  As a child, he didn’t know the details and was simply bewildered by his beloved father’s mysterious disappearance when Michael (Misha) was just 11 years old. In 1942, he, his older sister and his mother were herded up with other Jews and taken by rail to Terezin, which the Nazis called Theresienstadt.

The story, captured in his memoir “Somewhere There is Still a Sun,” is told not as an adult looking back but from his perspective as a child.  The simplicity of the telling heightens the impact of an already riveting story. Take, for example, his complaint from a distinctly innocent nine-year old that “in a moment they’ll be talking about Germany and Hitler and the Nazis, which is all any adult seems to talk about these days. So boring.” That was early in 1939. Later that year, when the Nazis deprived his father of his job, Misha was ecstatic because it opened up the possibility of weekday hikes together. The family was forcibly moved to a much smaller apartment in downtown Prague, which had been turned into a ghetto.

The boy would later have to turn in his violin because Jews were forbidden to have musical instruments. Schools were closed to Jews, and he would resort to picking up cigarette stubs to fashion new cigarettes he could sell on the street. Life in the ghetto became worse and worse, with the Nazis inciting the residents of Prague to ever-more violent acts of anti-Semitism. But it wasn’t until late in 1942 that Misha, his sister and mother were sent to Terezin,  where they were imprisoned for two and a half years.  Terezin was better than most concentration camps because the Nazis used it as a show camp, propaganda to dupe the International Red Cross that conditions were humane.  Activities even included plays, operas and concerts put on by the prisoners.

Misha lived in a bunkhouse with 40 boys.  It was a life of extreme hardship, hunger, filth, disease, terror, brutality and even friendship. Friendship with the nesharim, Hebrew for eagles, under the stern leadership of an older boy, Franta Maier, who made sure the nesharim boys kept themselves clean,  checked for bedbugs, cleaned the toilets, and participated in the “program,” (makeshift classes because school was forbidden.)  They even had a ragtag soccer team. The structure kept them alive. And so did Franta’s exhortations that “you are all brothers now.”  They would not let the Nazis separate them from their humanity. “Not their insults, not their edicts, not their camps. Our duty here is to survive, and survive as human beings.”

Some of the images are indelible. Misha having to retrieve a soccer ball on the other side of a fence, only to discover scores of sick and dying old people, lying on stained sheets or on the ground, emaciated and putrid. The smell is indescribable. The now-14-year old grabs the soccer ball and climbs back over the fence. The Red Cross had just concluded its inspection of the for-show parts of Terezin and never saw this small example of the Nazi’s crimes against humanity.

Young readers will be drawn to Misha as he and his friends fight for survival, growing in awareness of the worsening world around him, coming to understand that “people who stuff other people into train cars…don’t care about any of the things you’re supposed to care about.”  The transports to “the East” increase in frequency, with 5,000 prisoners  at a time being carried away, never to be heard from again.

In October, 1944, Mother, sister and Misha came perilously close to being transported, saved only because Misha’s mother’s work at Terezin included sewing teddy bears for an SS Officer’s family and friends.  Her immediate supervisor intervened in her behalf, and, at the last moment, the family was spared the trip to Auschwitz .  The reader can feel Misha’s heart pounding.   “I don’t think I ever understood what praying is. But I’m asking, begging for something. Please, don’t let them come and take us…. Please.”

In January, 1945 the tide of war is turning. Auschwitz is liberated.  A train arrives at Terezin from the opposite direction as the transports had gone. Now the trains were carrying still-living cadavers, dressed in dirty blue and white striped pajamas. Others started arriving on foot, from places with other strange names like Dachau, Mauthausen and Bergen-Belsen, bald and so emaciated that you couldn’t tell the men from the women.  What teeth they had left were rotting in their mouths.  The smell, thought Misha, reminded him of the summer their refrigerator broke down, the smell of rotting meat.

But the ragged prisoners of Terezin, starving in their own right, brought water. They boiled and mashed potatoes so the newcomers had life-saving nutrients. It was then that Misha and others learned of the gas chambers.  Struggling to comprehend, they couldn’t even talk about it.

It would take weeks before the end of the war, and their return to Prague, which thankfully had not been bombed. Of the 80 boys who lived in Room 7 over the 2 1/2 years, just 11 survived.  They did better than Terezin as a whole, and Terezin couldn’t even compare to Auschwitz, for which so many thousands of Terezin prisoners were fatally destined.

The title of the book comes from a letter written by Michael’s mother just days after liberation from Terezin and captures that tiny sliver of optimism that defies everything she and her family had been through. It also resonates with the strength, determination and brotherhood of Misha’s small band, under Franta’s leadership.

“Somewhere There is Still a Sun,”  written with writer Todd Hasak-Lowy, who helped Gruenbaum reconstruct his experiences, will be published later this month by Aladdin, a Simon and Schuster division for young readers, age 10-14. It evokes for me “The Diary of Ann Frank, which I read as a child.  Misha’s story spoke to the young person buried in all of us, and, as an adult, I could not put it down.

I welcome your comments in the section below. To be alerted when a new blog is posted, click on “Follow’ in the lower right portion of your screen.

2 thoughts on “The Holocaust through a child’s eyes”